Israeli Army To Demolish Four Homes, One Structure, Near Hebron 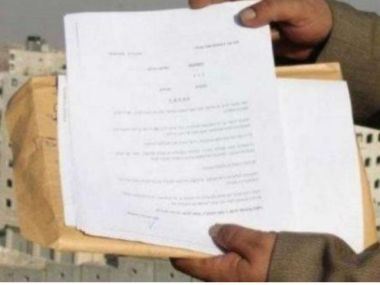 On Thursday, several Israeli army vehicles, accompanied by personnel of the “Civil Administration Office,” the executive branch of Israel’s illegal military occupation, invaded Beit Awwa town, west of Hebron, in the southern part of the occupied West Bank, and delivered orders for the demolition of four Palestinian homes and an industrial structure.

The Israeli army is claiming that the buildings were constructed without a permit from the Civil Administration Office.

The buildings are within the structural plan of the town, and therefore, are under Local Counsil’s jurisdiction and were licensed by it.

Abdul-Karim called on various international legal and human rights groups to intervene and stop the seriously escalating Israeli violations and their property in the occupied West Bank, including occupied East Jerusalem.

In related news, the soldiers invaded the ar-Ras al-Ahmar area in the West Bank’s Northern Plains, and confiscated a tractor, owned by Ahmad Thiab Abu Kheizaran. The confiscation comes days after the army took several cars, trucks and agricultural tractors of the locals in the same area.