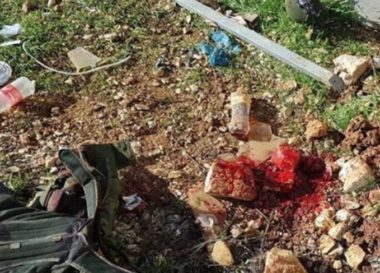 Israeli sources have reported, on Friday morning, that one soldier was moderately injured in Beit El colony, near the northern entrance of al-Biereh city in central West Bank, after a Palestinian struck him in the head.

The sources stated that the Palestinian managed to cross the fence into the colony, and hurled stones at a  soldier, striking him in the head, in Beit El military base, near its perimeter fence, causing moderate-to-serious wounds.

According to the army, the soldier tried to stop the Palestinian after he infiltrated into the base, and struggled with him, before he struck the soldiers in the head.

They added that the Palestinian managed to escape unharmed, while the army initiated extensive searches in the area.

The soldier received initial treatment at the scene, before he was rushed to Hadassah Ein Karem Medical Center, in occupied Jerusalem.

Palestinian media sources said dozens of soldiers were deployed in the colony, and various areas around it, before launching a massive search for the Palestinian.

They added that the soldiers closed the main Ramallah-Nablus road, near the al-Jalazoun refugee camp, north of Ramallah, and installed concrete blocks, restricting the movement of Palestinian traffic.

The soldiers also invaded Surda village, installed a roadblock at its main entrance, and prevented the Palestinians from entering or leaving it.