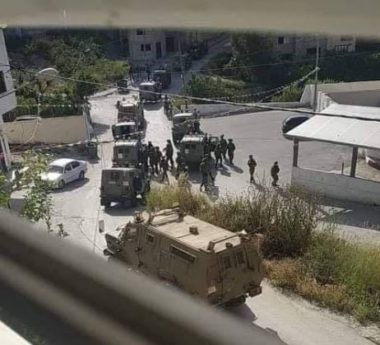 During a pre-dawn invasion of the northern West Bank on Tuesday, a 21-year old Israeli soldier was killed by Palestinians who dropped a large stone from a rooftop on his head while he was in the street. The soldier who was killed was identified as Staff Sgt. Amit Ben Ygal.

According to the Israeli daily Ha’aretz, Ygal was among a battalion of soldiers with the Golani Brigade who invaded the village of Ya’bad, southwest of the city of Jenin in the northern West Bank, around 4:00 in the morning on Tuesday.

Many villagers were awake at the time, to eat their pre-dawn meal and prepare for the day of fasting during the Muslim holy month of Ramadan. So the soldiers, who often engage in pre-dawn raids but usually do so while residents are sleeping, instead were met by angry youth who demanded that they leave their town.

The Israeli military reported that the Golani Brigade was invading the village in order to abduct two Palestinians that they suspected of ‘terrorism’, and another two who were suspected of having thrown stones at soldiers during previous invasions.

The person who dropped the stone on the soldier has not been identified, but Israeli troops have issued a complete lockdown order on the village and are searching house-by-house, interrogating the residents and preventing them from leaving their homes.

Following the initial invasion, dozens of soldiers and armored vehicles stormed the town, and initiated very violent and extensive searches of homes and buildings, and abducted at least eighteen Palestinians, including a father and his three children.

Media sources in Jenin said the soldiers abducted Mohammad Atiyya Abu Bakr along with his brothers Thabet, Bassel and Ra’fat, in addition to Ribhi Mohammad Abu Bakr, along with his wife, his daughter Eman, 15, and his sons Mohammad and Khaled.

The soldiers also abducted Anas Kamer Abu Shamla and his brother Yazan, in addition to assaulting and wounding their brother, Mohammad.

The soldiers also stormed and ransacked many homes, including the properties of Bassem Lufti Abu Bakr, Sa’ed Omar Abu Bakr, Atiyya Younis Asfour, in addition to his brothers Nathmi and Ribhi, and interrogated them for several hours.

Furthermore, the soldiers also occupied the rooftops of many homes, especially in the as-Salma neighborhood, while more soldiers were deployed in the town’s streets and around it, completely isolating it.