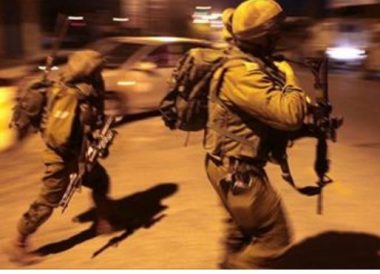 Israeli soldiers abducted, on Monday at dawn, fourteen Palestinians, including two children, only 12 and 13 years of age, during military invasions and violent searches of homes, in different parts of the occupied west Bank, in including occupied East Jerusalem.

The Palestinian Prisoners Society (PPS) has reported that the soldiers abducted six Palestinians, including two children, from their homes in several parts of occupied East Jerusalem.

In Ramallah district, in central West Bank, the soldiers abducted Ata Othman Orabi and Mohammad Jamal Nakhla, from the al-Jalazoun refugee camp, in addition to Dia’ Mohammad Ja’far, from the al-Am’ari refugee camp, while Ahmad Wael ‘Affana was abducted by undercover soldiers, who broke into his home in the al-Masyoun neighborhood in Ramallah city.

In Hebron, in the southern part of the West Bank, the soldiers abducted Shebil Ahmad Daghameen.

Last night, a Palestinian man, identified as Nidal Bahjat Abdul-Hadi, 50,  from Jenin refugee camp, in the northern West Bank city of Jenin, was abducted while crossing through al-Karama Border Terminal on his way back home from Jordan.