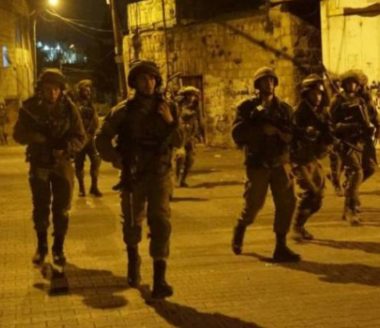 Israeli soldiers abducted, overnight until morning hours Tuesday, at least 28 Palestinians, including children, and a shepherd, in several parts of the occupied West Bank, the Palestinian Prisoners’ Society (PPS) has reported.

The PPS office in Jenin, in northern West Bank, has reported that the soldiers abducted eight Palestinians in the governorate, after invading their homes and ransacking them.

They have been identified as Majd Ahmad Ba’jawi, Abdullah Maher Abu Bakr, Jihad Allam Abu Bakr, Thaher Haitham Amarna, and his brother Adel, all from Ya’bad town, west of Jenin, in addition to Rateb Abdul-Karim ‘Oweis, Baha’ Qasrawi and Mohammad Adel Alaqma, from several towns in the governorate.

It is worth mentioning that Rateb is the son of Abdul-Karim ‘Oweis, who is imprisoned by Israel after being sentenced to life.

In Nablus, also in northern West Bank, the soldiers abducted two siblings, identified as Ala’ Hashash and his brother Ameed, in addition to Sultan Ibrahim Abu Mustafa and Fadi Emad Abu Hadrous.

In addition, the soldiers abducted a Palestinian shepherd identified as Yousef Bisharat, in Makhoul area, in the West Bank’s Northern Plains, after a group of extremist illegal Israeli colonists chased him, and his herd.

It is worth mentioning that the colonists frequently attack Palestinian shepherds in the area, leading to many injuries, in addition to steeling or killing some of their livestock, while Israeli soldiers also abducted many of shepherds and farmers.