Israeli Soldiers Abduct A Child And A Young Man, In Jerusalem 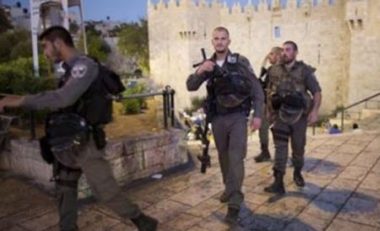 Israeli soldiers invaded, on Friday at dawn, Silwan and the al-‘Eesawiyya towns, in occupied East Jerusalem, and abducted a child and a young man.

The soldiers invaded and violently searched a home in Silwan, south of the Al-Aqsa Mosque, and abducted Amir Jawad Jaber, 14, before taking him to an interrogation center in Jerusalem.

The soldiers abducted a young man, identified as Khader Rabah Abu al-Hummus, from the al-‘Eesawiyya town, in the heart of Jerusalem, after stopping him at a military roadblock near the main entrance of Shu’fat refugee camp, north of Jerusalem.