Israeli Soldiers Abduct A Palestinian, Confiscate A Car, In Hebron 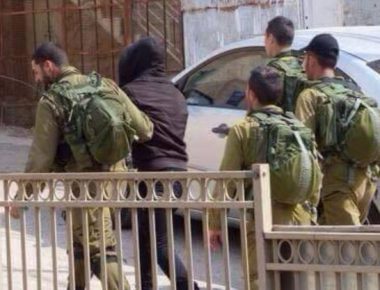 Israeli soldiers abducted, on Saturday morning, a young Palestinian man, and confiscated one car, near the Ibrahimi Mosque, in the southern West Bank city of Hebron, in addition to briefly detaining several children.

Local sources said that soldiers abducted Yazan Mahmoud Taha, 27, after he stopped his car, and tried to intervene after the soldiers detained several children, near the Ibrahimi Mosque.

They added that the soldiers abducted Yazan, and took him to a nearby military base, after cuffing and blindfolding him.

Furthermore, the soldiers invaded and searched the home of Mohammad Abdul-Qader Abu Harb, in Shiokh nearby town, and confiscated his car.

In related news, the soldiers installed many roadblocks on main roads leading to villages, towns and refugee camps, in Hebron, before stopping and searching many cars, and interrogated several Palestinians while inspecting their ID cards.