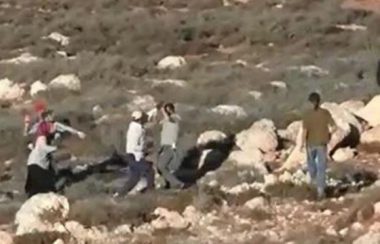 Israeli soldiers shot, on Saturday evening, six Palestinians with live fire, and rubber-coated steel bullets, after a group of Palestinians tried to stop fanatic Israeli colonists, who invaded their olive orchards, and cut at least thirty trees, near the northern West Bank city of Nablus.

The incident took place after the colonists invaded Palestinian olive orchards in Madama village, south of Nablus, and cut at least thirty trees, before the locals rushed to the lands and stopped the invaders.

Israeli soldiers then rushed to the area, and started firing at the Palestinians, wounding three with live fire, and three others with rubber-coated steel bullets, instead of removing the colonists.

Medical sources said the wounded Palestinians were rushed to a hospital in Nablus, suffering mild-to-moderate injuries.

In addition, the soldiers closed many Palestinian roads, in the southern and western parts of Nablus, and stopped dozens of cars, before searching them, and interrogated many Palestinians while inspecting their ID cards.

The soldiers installed a roadblock on the main Nablus-Tulkarem road, west of Deir Sharaf town, in addition to another roadblock near Jeet junction, and a third roadblock north of Huwwara town, south of Nablus.

The soldiers stopped dozens of cars, and searched them, while interrogating many Palestinians, while a large number of colonists gathered in areas, west and south of Nablus, but the soldiers did not attempt to remove them.