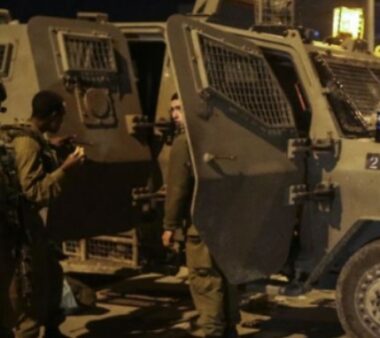 On Monday evening, Israeli soldiers abducted a Palestinian from Jenin after stopping him at a military roadblock near Nablus in the northern West Bank.

Montaser Sammour,  the head of the Jenin office of the Palestinian Prisoners’ Society (PPS), said the soldiers abducted Adham Al-Qadi from the Jenin refugee camp.

Sammour added that Adham was crossing the Huwwara military roadblock south of Nablus when the soldiers abducted him and took him to an unknown destination.

In related news, many army jeeps invaded Ya’bad, Rommana, and Zabbouba towns near Jenin and drove on their various streets before withdrawing.

Furthermore, the soldiers invaded Kifl Hares town, north of the central West Bank, to accompany dozens of colonizers into archeological sites, including Islamic shrines, and closed the entire area to prevent the Palestinians from entering it.