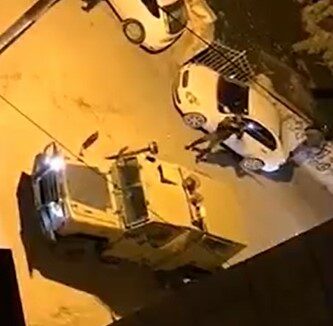 On Tuesday dawn, Israeli soldiers invaded Abu Dis town, east of the occupied capital Jerusalem, in the West Bank, leading to protests, and fired gas bombs and concussion grenades at random, causing a fire in one home.

Update: The Mayor of Abu Dis, Abdul-Salam Ayyad, told the soldiers fired many gas bombs, striking the home of Fadi Mohammad Awwad, burning the property and causing his seven family members to suffocate and suffer the effects of tear gas inhalation.

They added that some of the homes were hit by the army fire, including one that caught fire after high-velocity gas bombs broke through a window and entered the property.

Palestinian medics and firefighters rushed to the home to help the family and extinguish the fire; no injuries have been reported.