Soldiers Attack The Funeral Of A Palestinian Woman In Hebron 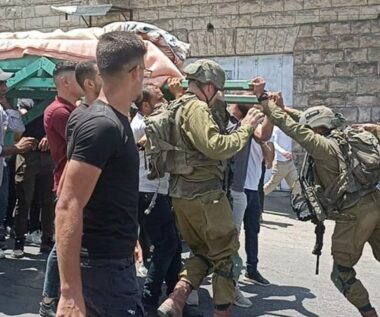 On Monday evening, Israeli soldiers attacked the funeral procession of an elderly Palestinian woman in Beit Ummar town, north of Hebron, in the southern part of the occupied West Bank.

Local sources said the Palestinians were participating in the funeral procession of Faeqa Abu Ayyash before the soldiers closed the town’s main entrance gate to prevent them from reaching the graveyard.

They added that the soldiers fired many gas bombs and concussion grenades to force the Palestinians to leave the area, leading to protests.

The army then fired many live rounds, rubber-coated steel bullets, and gas bombs, causing many Palestinian to suffer the effects of tear gas inhalation.

The soldiers also invaded and searched homes in the area before occupying their rooftops to use as firing posts and monitoring towers.

Also on Monday evening, Israeli soldiers shot eleven Palestinians and abducted a father and his son in Beit Rima town, northwest of Ramallah, in the central part of the occupied West Bank.

Earlier Monday, the soldiers abducted two children from the Dyouk Al-Foqa village north of Jericho in the northeastern West Bank.

Furthermore, the soldiers abducted eighteen Palestinians, including the brother of a detainee who died from medical neglect in Israeli prisons, from their homes in several parts of the occupied West Bank.

The army also abducted two children from the Dyouk Al-Foqa village, north of Jericho in the northeastern West Bank.