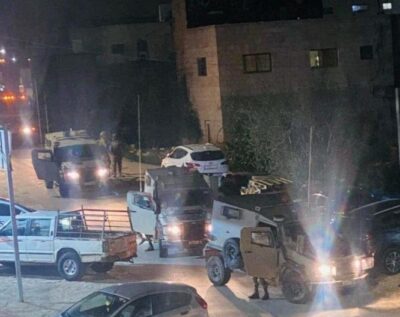 On Monday evening, Israeli soldiers shot eleven Palestinians and abducted a father and his son in Beit Rima town, northwest of Ramallah, in the central part of the occupied West Bank.

They added that the soldiers fired a barrage of live fire, rubber-coated steel bullets, gas bombs, and concussion grenades.

Medical sources said the soldiers shot seven Palestinians with live rounds; one in the shoulder, one in the thigh, and five in the lower extremities.

The army also abducted Samer Barghouthi and his son Bassel from their home after the soldiers invaded and ransacked the property.

Also Monday, the soldiers abducted two children from the Dyouk Al-Foqa village north of Jericho in the northeastern West Bank.

Furthermore, the soldiers abducted eighteen Palestinians, including the brother of a detainee who died from medical neglect in Israeli prisons, from their homes in several parts of the occupied West Bank.

The army also abducted two children from the Dyouk Al-Foqa village, north of Jericho in the northeastern West Bank.