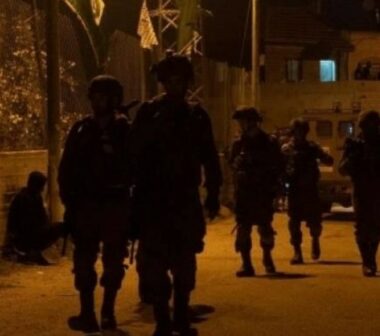 On Monday dawn, Israeli soldiers abducted eighteen Palestinians, including the brother of a detainee who died from medical neglect in Israeli prisons, from their homes in several parts of the occupied West Bank.

Media sources in Nablus, in the northern West Bank, the soldiers stormed and ransacked several homes in the city and abducted Mojahed Mabrouka from the Northern Mountain, Omar Ash-Shami from the Al-Makhfiyya area, and Ameed Teryaqi from the Al-Etihad area, in the city.

In Ramallah, in the central West Bank, the soldiers invaded and ransacked many homes in the Al-Am’ari refugee camp and abducted two former political prisoners, Fadi Atiya and Rami Ghazi Eid.

The soldiers also abducted Jihad Abu Hmeid, the brother of Nasser Abu Hmeid, 50, who died at an Israeli medical center, on December 20, 2022, from cancer that went untreated professionally during his many years of imprisonment by Israel.

In Hebron city, in the southern part of the West Bank, the soldiers abducted Nour Abu Aisha, 35, from his home, in addition to Mohammad Abdul-Mo’ti Ghatasha, 21, from the Al-Fawwar refugee camp, south of the city.