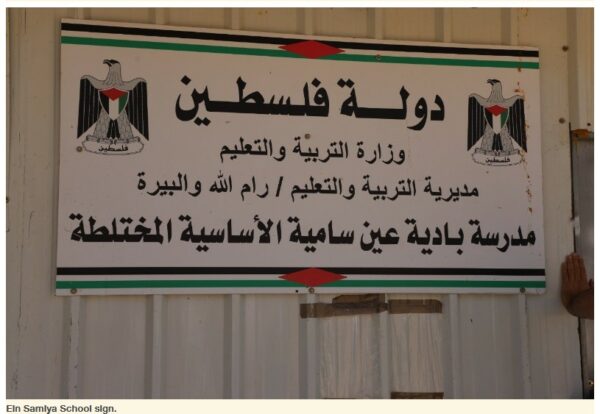 JERUSALEM, Monday, January 2, 2023 (WAFA) – Following a petition to the Israeli Supreme Court, the Jerusalem Legal Aid and Human Rights Center (JLAC), which has been handling the case since the beginning of 2022, succeeded in obtaining a precautionary order preventing the eviction and demolition of Ein Samiya Bedouin Community School, near Ramallah.

It said in a statement that this follows a previous decision by the Israeli Central Court in Jerusalem that the school is to be evacuated before the end of 2022, or it would otherwise face demolition along with associated demolition costs. The court refused to intervene to prevent the demolition of the school after rejecting the submitted building permit application and submitted detailed plan. Rather, the court imposed three fines amounting to 45,000 shekels (app. $13,000) and issued a final decision last October to evacuate and demolish the school.

After exhausting these procedures, which involved JLAC lawyers stopping the demolition several times, the Center resorted to referencing an Israeli emergency order from 2010 that was created to legalize public buildings within colonial settlement outposts, as to test the discriminatory nature of Israeli military orders.

JLAC lawyers sent a correspondence to the Israeli military administration, referencing clause 2.1 of the emergency order which permits the establishment and exemption from licensing of education facilities in what the order called “Judea and Samaria”. The emergency order also stipulated that approval would be subject to the head of the local council.

When the administration rejected this, JLAC lawyers went to the Israeli Supreme Court, which accepted the appeal and gave the Israeli Civil Administration, an arm of the Israeli military government in charge of the occupied West Bank, until the 26th of January to submit its response. It was also ordered that the school would be free from evacuation or demolition until procedures are exhausted. Hence, the case also challenges the racist nature of military occupation.

It should be noted that recent attempts of the occupation to demolish the Ein Samiya school coincided with the start of the students’ end-of-semester exams. Prior to the establishment of the school in mid-January of last year, maintaining their right to education had otherwise involved the students enduring arduous treks to schools in neighboring villages.