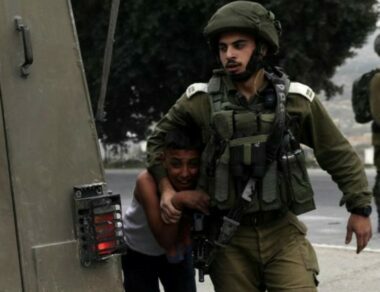 On Monday, Israeli soldiers abducted two children from the Dyouk Al-Foqa village, north of Jericho in the northeastern West Bank.

The sources added that the soldiers abducted Adnan Rashayda, 17, and Mustafa Rashayda, 12, after interrogating them and their families.

In related news, the soldiers invaded the Silat Al-Harithiya town, leading to protests and causing many schoolchildren to suffer the effects of tear gas inhalation.

On Monday dawn, Israeli soldiers abducted eighteen Palestinians, including the brother of a detainee who died from medical neglect in Israeli prisons, from their homes in several parts of the occupied West Bank.