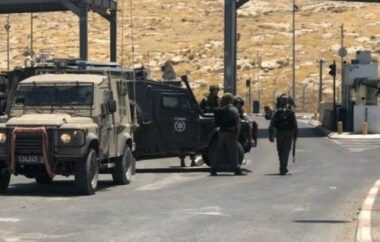 On Wednesday, Israeli soldiers abducted a former political prisoner at the “Container” military roadblock northeast of Bethlehem, in the occupied West, and closed it for several hours, causing an extended traffic jam.

Media sources said the soldiers abducted Firas Ahmad Hassan, 47, after forcing him out of a car at the roadblock and abducted him.

They added that the soldiers closed the roadblock for several hours without obvious reason, causing hundreds of cars to line up waiting to be allowed through.

It is worth mentioning that the permanent roadblock is at an intersection that became the only link between the southern parts of the West Bank and the central and northern parts of the occupied territory, especially since dozens of thousands of Palestinians, including students and workers, have to use that road to reach their destinations.

In related news, the soldiers abducted a former political prisoner, Hakim Ahmad Fuqaha’, 26, from the central West Bank city of Tubas after summoning him for interrogation.

On Wednesday dawn, Israeli soldiers abducted five Palestinians from several parts of the Ramallah governorate in the central West Bank.

On Tuesday night, Israeli soldiers abducted two Palestinians, Razi Ghassan Alawna and Abbas Ahmad Khaliliyya, from Jaba’ south of the northern West Bank city of Jenin after stopping them at a military roadblock near Ramallah.