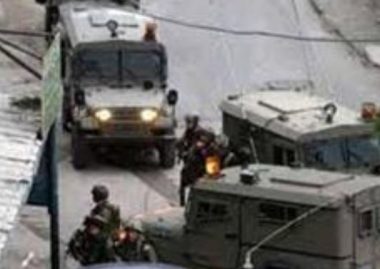 Israeli soldiers invaded, Friday, the village of ‘Ejja, southwest of the northern West Bank city of Jenin, and abducted one Palestinian.

Media sources in Jenin said several military jeeps invaded the village, before the soldiers stormed into and searched homes, and interrogated a few Palestinians while inspecting their ID cards.

They added that the soldiers abducted a young man, identified as Khaled Waleed Omariyya, 24, and took him to an unknown destination.

Also on Friday, the soldiers invaded Jenin city, and clashed with many Palestinians, before shooting two children, including one who suffered a life-threatening injury.