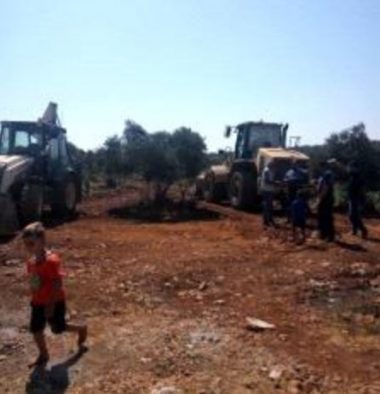 He added that Israel is planning to pave a new road extending from Shakid illegal Israeli colony, to Hananit and Tal Menashe illegal colonies, built on privately-owned Palestinian lands, in addition to building a new section of the Annexation Wall.

Resident Hasan Khatib, told WAFA Palestinian News Agency that the Palestinians are left without any path to their lands and orchards in the northern area of the village, and added that the army is even trying to bulldoze the village’s graveyard.

The soldiers also placed some construction materials in a land, owned by Abdullah Fahmi Zeid, to be used for the construction of the Wall.

Khatib stated that, once the new section of the Annexation Wall is built on Palestinian lands, near Shakid colony, it will lead to the illegal confiscation of more than 1000 dunams of lands, owned by Palestinians from Ya’bad and Nazlet Sheikh.

Furthermore, the soldiers invaded ‘Ejja village, southwest of the northern West Bank city of Jenin, and abducted one Palestinian.

Also on Friday, the soldiers invaded Jenin city, and clashed with many Palestinians, before shooting two children, including one who suffered a life-threatening injury.