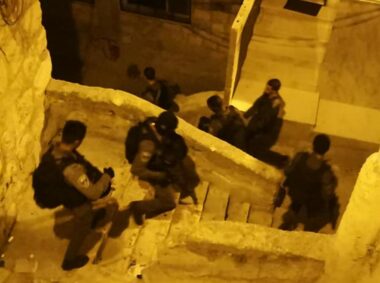 Israeli soldiers abducted, at dawn Sunday, a young Palestinian man and searched many homes in Hebron city, in the southern part of the occupied West Bank.

The soldiers abducted a young man, Dia’ Abu Aisha, after stopping him in the southern area of Hebron’s Old City, and took him to an unknown destination, eyewitnesses said.

The soldiers also invaded and searched many homes in the Salayma neighborhood in Hebron, causing damage, and interrogated several Palestinians.

Furthermore, the army installed roadblocks on various roads leading to Hebron city and several surrounding towns, stopped and searched dozens of cars, and interrogated many Palestinians while inspecting their ID cards.