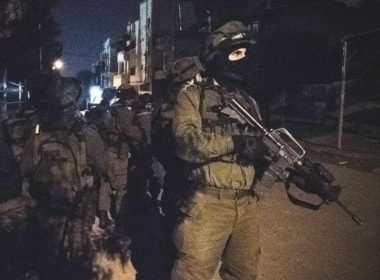 Dozens of Israeli soldiers invaded, on Tuesday at dawn, the Deheishe refugee camp, south of the West Bank city of Bethlehem, and abducted a young man.

Media sources in Bethlehem said the soldiers stormed the refugee camp from its main entrance, near the Jerusalem-Hebron city, before invading and searching homes, and abducted a young man, identified as Mohammad Tahseen Hajajra, 22.

They added that dozens of youngsters protested the invasion, and hurled stones at the soldiers, while the army fired live rounds, gas bombs and concussion grenades at the protesters.

It is worth mentioning that Deheishe has been subject to extensive and violent military invasions, leading to many abductions and injuries, in addition to the fatal shooting of a child, identified as Arkan Tha’er Mizhir, 25, who was killed by the army on July 22nd 2018.