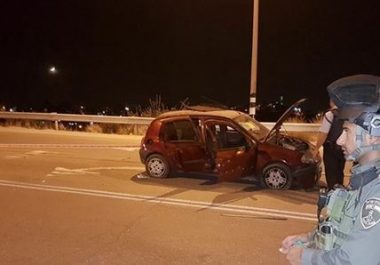 Israeli soldiers abducted, on Thursday evening, a young man near the central West Bank city of Ramallah, after opening fire at his car, and a child in Hebron, in southern West Bank.

Media sources said the soldiers opened fire at a man, driving near the entrance of Ni’lin village, west of Ramallah, and abducted him, after his car collided with a car of an Israeli colonist.

The army claimed the accident was a “deliberate attack,” and fired live rounds at the car’s wheels, before thoroughly searching the car, but their search came out empty.

The abducted driver has been identified as Ma’aa No’man Srour, 29, from Ni’lin village.

In addition, the soldiers abducted a child, identified as Ali Rajabi, 14, near the Ibrahimi Mosque, in Hebron, and took him to a nearby interrogation facility.