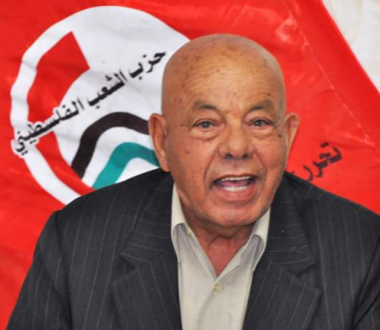 Israeli soldiers abducted, on Sunday evening, an elderly Palestinian author, intellectual and political leader of the leftist Palestinian People’s Party (PPS) from Halhoul town, north of Hebron, in the southern part of the occupied West Bank.

The abducted Palestinian figure, Mohammad Sa’id Medhya, 83, was taken prisoner after a number of fanatic Israeli colonists assaulted him and members of the Land Defense Committee, before the soldiers abducted him, instead of removing the assailing colonists.

The soldiers took him to an interrogation facility in Keryat Arba’ illegal colony, built on Palestinian lands, east of Hebron city.

Medhya was imprisoned by Israeli twice before, in addition to being deported to Jordan from 1970-1994.

He was elected as a member of the Administrative Committee of the General Union of Palestinian Writers, from 1996-2004.

He also wrote many books and novels, in addition to research documents, about the Palestinian culture and struggle, Zionism, sociobiology, democracy and various other subjects.