Israeli Soldiers Abduct An Imam Of A Mosque In Jerusalem 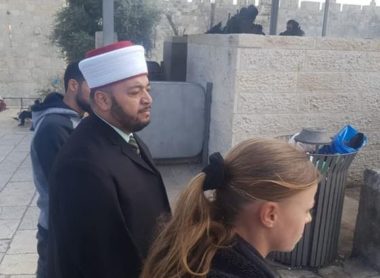 Israeli soldiers abducted, on Monday evening, the Imam of Beit Hanina Mosque, as he was in Bab al-‘Amoud (Damascus Gate) area, in occupied Jerusalem, and took him to an interrogation facility.

Media sources said the soldiers abducted Sheikh Ra’ed Da’na, for leading the prayers in Bab ar-Rahma area, near the Al-Aqsa Mosque, after the soldiers closed it and prevented the worshipers from entering the holy site.

His abduction came after dozens of soldiers resorted to the excessive use of force against Palestinian Muslim worshipers in Al-Aqsa Mosque Compound, and abducted at least five Palestinians, including one woman. The soldiers later released the abducted Palestinians, including Sheikh Da’na, and the Palestinian woman, Nathima Ebkeirat, who works in the restoration of scripts, after issuing orders preventing them from entering the Al-Aqsa Mosque compound for fifteen days.

It is worth mentioning that, on Sunday at night, the soldiers closed the main gate in Bab ar-Rahma with chains to prevented workers of the Waqf and Islamic Endowment Department from entering it, in addition to denying the worshipers access to the holy site.

|Israeli Soldiers Abduct Four Palestinians, Including One Woman, In Al-Aqsa|