Israeli Soldiers Abduct Four Palestinians, Including One Woman, In Al-Aqsa 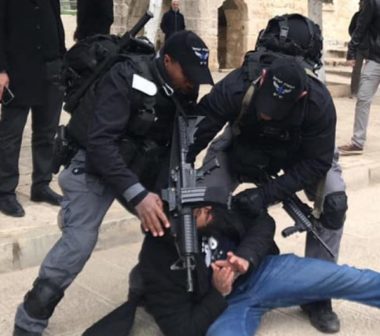 Israeli soldiers assaulted, Monday, many worshipers in the Al-Aqsa Mosque, in occupied Jerusalem, before abducting four Palestinians, including one woman.

Media sources said the soldiers assaulted several Muslim worshipers while trying to remove them from the holy site, and closed all gates leading to it.

One of the abducted Palestinians has been identified as Sheikh Ra’ed Da’na.

They added that dozens of worshipers held noon prayers in Bab ar-Rahma area, to protest the closure of the Bab al-Rahma Gate, especially after the army closed it with chains, on Sunday at night.

The soldiers resorted to the excessive use of force against the worshipers, including many women and children.