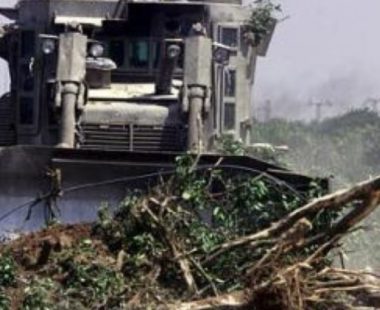 Daghlas added that the army is bulldozing the lands to expand the illegal Givat Ronim colony, which was built on private Palestinian lands, east of Burin village southwest of Nablus.

In addition, the soldiers bulldozed large areas of Palestinian lands, owned by villages from Sanniriya and Masha villages, south of the northern West Bank city of Qalqilia.

Mohammad Sheikh, a member of Sanniriya village council, said the bulldozing of the Palestinian lands aims at linking four illegal colonies, which were built on private lands, in order to expand them by constructing more units and facilities.

He added that the illegal colonies Israel is trying to expand are Etz Efraim, Sha’arei Tikva, Elkana and Oranit.