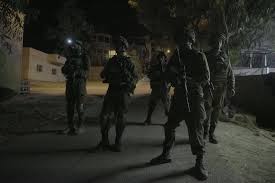 The two children were abducted from Shu’fat neighborhood in East Jerusalem, from a street near their home. The two youth were identified as Yasser Quresh and Zein al-Dibis. They were abducted by Israeli undercover forces dressed as civilians, who never identified themselves as police or soldiers before grabbing the boys and pushing them into their unmarked vehicle.

Only later were the parents of the two boys able to find out that it was Israeli forces who had abducted the children.

In Jenin District, in the northern part of the West Bank, Israeli forces on Monday abducted four young men.

Local sources told the Palestinian News agency Wafa that Israeli forces stormed the town of Arrabeh, south of Jenin, and abducted Hazem Mazen ‘Atari, after raiding his house and ransacking it.

In the same context, Israeli undercover forces abducted Omar Suleiman Sa’adi from the Jenin refugee camp after they ambushed him on the Arab-American University road. The soldiers were dressed as Palestinians and did not identify themselves as soldiers before they grabbed and kidnapped Omar.

Also in the Jenin District, in the town of Qabatiya, Israeli forces abducted Mohammad Adnan Nazzal and Ibrahim Zakarneh. The soldiers raided and searched their houses in Qabatiya, and pulled the men from their beds as they were sleeping to take them to an Israeli military base for interrogation and detention.

In the Nablus area, Israeli forces invaded the town of Aqaba, north of Tubas, and abducted a young man who was sleeping in his bed.

The director of the Palestinian Prisoner Society in Tubas, Mahmoud Sawafta, said that the Israeli forces abducted one young man identified as Adham Zayed al-Masri, after raiding the house of his family in the town.

And in Tulkarem District, also in the northern West Bank, Israeli forces abducted a young man from the Shuweika suburb north of Tulkarem.

The Prisoners’ Society in Tulkarem told the Wafa News Agency that the Israeli forces abducted Hamdan Marwan Adhailia, 30, after raiding his house and searching it.

These pre-dawn raids are a nightly occurrence in the West Bank, with Israeli forces invading towns and villages while the local residents are sleeping.

The Israeli troops then engage in a practice of breaking down doors, ransacking homes and grabbing young men and women from their beds as they lie sleeping.