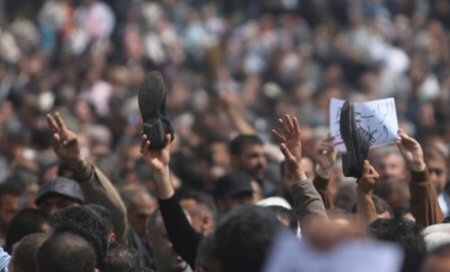 Hundreds of Palestinians have demonstrated in Gaza City, as protests proceed against the Palestinian Authority’s decision to suspend their salaries, as Abbas’s arbitrary procedures against Gaza continue.

The Palestinian Authority (PA) has decided to stop paying salaries and social welfare to hundreds of Palestinians in the Gaza Strip, including many Fateh members, local sources say.

Abbas and senior PA officials recently warned that they would impose severe sanctions on the Gaza Strip unless Hamas agreed to relinquish security and civilian control over the coastal enclave, under his conditions.

The salaries of 400 hundred ex-detainees and 20 detainees being held in Israeli jails were suspended by the PA, in Ramallah, the Palestinian Detainees and Ex-Detainees Affairs Commission in Gaza said.

Seventy-one specialized physicians, 59 nurses and other health professionals, 75 administrative and service workers, technicians, engineering and maintenance technicians, and 41 other professions were among the categories covered by the halt of salaries procedures, the Ministry added.

Gazans are calling upon the international community and human rights organizations to immediately intervene in stopping Abbas’s sanctions against the enclave, local sources said, according to Days of Palestine.