Jerusalem: Over $55m to be Invested in Old City Settlement Projects 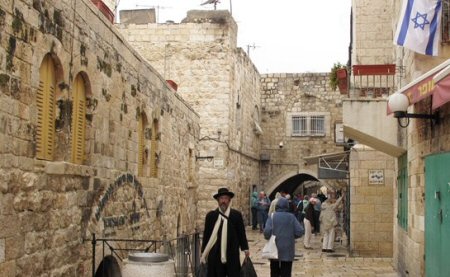 The Company for the Reconstruction and Development of the Jewish Quarter, in the Old City of Jerusalem, invested more than 200 million shekels ($55,288,940) into “settlement projects”, in Jerusalem’s Old City district.

Israel Hayom news outlet reported that the projects will include renovating the Tiferet Yisrael Synagogue, the Burnt House, and the Wohl Archaeological Museum.

The company is reportedly working to upgrade the Jewish Quarter, which is located in the Old City, and will cost more than 200 million shekels.

Earlier this week, according to Ma’an, Ir Amim published a new map, describing an “accelerated, intensifying chain of new facts on the ground in the most historically contested and politically sensitive part of Jerusalem: the Old City and adjacent ring of Palestinian neighborhoods.”

The NGO pointed to “a mounting number of state-sponsored settlement campaigns inside Palestinian neighborhoods,” as well as “settler-initiated evictions of Palestinians, takeovers of their homes, and the expansion of settler compounds,” in addition the use of “touristic settlement sites” as “key points along a ring of tightening Israeli control.”

The NGO group also stressed handing over the management of such projects to settlement organizations allows Israel “to exploit tourism as a tool for reinforcing settlement initiatives in the Old City and its environs, erasing the significant Palestinian presence there, promulgating the idea of the entire area as an Israeli environment, and imposing a nationalistic Israeli character that blurs the multi-religious and multi-cultural nature of the space, primarily to the detriment of the Muslim sites and presence.”

“This use of national parks and tourist sites serves the goal of transforming the Palestinian neighborhoods in and around the Old City, including Silwan, al-Tur, Ras al-Amud and Sheikh Jarrah, from a densely populated Palestinian area into one sprawling tourist site that bolsters Israeli control of the area and access to it.”

02/18/19 Palestinian Family to be Evicted, Home Handed to Settlers