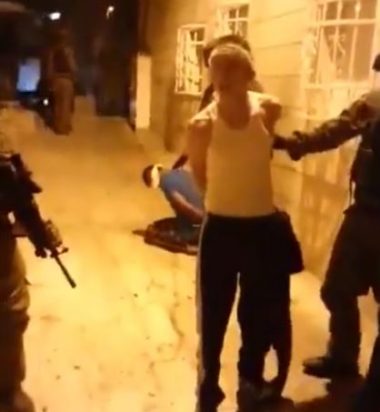 The Palestinian Prisoners’ Society (PPS) has reported that Israeli soldiers abducted, on Tuesday at dawn, eighteen Palestinians from their homes in several parts of the occupied West Bank.

In Tubas, in northeastern West Bank, the soldiers abducted Mohammad Jamal Sawafta, after stopping him at a sudden military roadblock, north of the city.

Israeli soldiers invaded, on Tuesday at dawn, several Palestinian communities in various parts of the occupied West Bank, violently searched and ransacked homes, and abducted at least eight Palestinians, including one woman.

The Palestinian Prisoners’ Society (PPS) said dozens of soldiers invaded Tulkarem city, and Qaffin town, northeast of the city, before breaking into and searching many homes, and abducted two Palestinians, identified as former political prisoner Moath Samir Haroun, 30, from Tulkarem, and Ahmad Adel Ammar, from Qaffin.

Furthermore, the soldiers invaded many neighborhoods in Hebron city, and nearby towns, especially Sammoa’, Yatta and Ethna, and installed roadblocks on main roads leading to the towns of Sa’ir and Halhoul, in addition to Hebron’s northern entrance, before stopping and searching dozens of cars, and interrogated many Palestinians while inspecting their Id cards.

The army also invaded and searched many homes in Beit Ummar town, north of Hebron, especially al-Khalla and el-Ein areas, causing excessive property damage, and anxiety attacks among many residents, mainly the children, as the soldiers used dogs in searching the properties after violently storming them.

The soldiers removed and destroyed tiles from many of the invaded homes, and confiscated Palestinian flags, and pictures of slain Palestinians.

In addition, the soldiers abducted Mohammad Jamal Sawafta, from Tubas, in northeastern West Bank, after stopping him at a sudden military roadblock, north of the city.