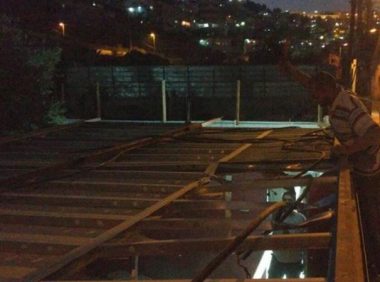 A Palestinian man from Ein al-Louza neighborhood in Silwan town, south of the Al-Aqsa Mosque, in occupied Jerusalem, demolished his own store, on Monday evening, to avoid excessively high fines and fees by the City Council.

The Palestinian, Amin Al-Abbassi, said he had to self-demolish his building, after the City Council decided to demolish it, and granted him two weeks to do so, or else face excessive fines and fees, in addition to facing legal issues in its courts.

Al-Abbassi added that he built his store two years ago, using tin and steel, and that the army and the City Council repeatedly invaded the property, and issued demolition orders for “being built without a permit.”

On Saturday evening, a Palestinian identified as Abdul-Moghni Dweik, had to demolish his own home in al-Bustan neighborhood, in Silwan town, to avoid more excessive fines and costs, after the City Council issued a demolition order targeting his property.