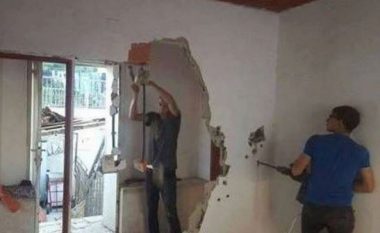 A Palestinian man demolished, on Saturday evening, his own home in al-Bustan neighborhood, in Silwan town, south of the Al-Aqsa Mosque, in occupied Jerusalem, to avoid more excessive fines and costs, after the City Council issued a demolition order targeting his property.

The Palestinian, Abdul-Moghni Dweik, said the Jerusalem City Council and the Israeli police threatened to impose severe fines and penalties, in addition to excessive costs, if he does not demolish his home on his own.

The Palestinian was told that he would have to pay at least 80.000 Israeli Shekels for the costs of demolishing his 80 square/meter home, in addition to various high fines and fees.

In addition, dozens of soldiers invaded, earlier Sunday, several neighborhoods in Hebron city, and nearby towns, and violently searched many homes.

In related news, the soldiers invaded Teqoua’ town, east of Bethlehem, and fired several live rounds, gas bombs and concussion, causing many children to suffer the effects of teargas inhalation.

In occupied East Jerusalem, the soldiers abducted, on Saturday evening and Sunday at dawn, seven Palestinians, including five children, between the ages of 12 and 15, from Silwan town, south of the Al-Aqsa Mosque, and in the Old City.

In Bethlehem governorate, the army abducted four Palestinians, after the soldiers invaded and searched many homes, in addition to breaking into homes near Jenin, in northern West Bank, and summoning four Palestinians for interrogation.