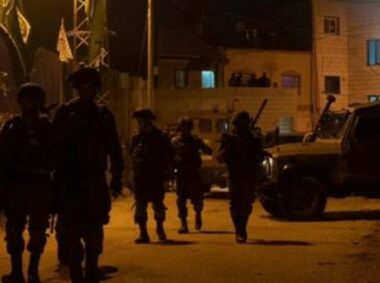 On Friday dawn, Israeli soldiers invaded and ransacked many homes across the occupied West Bank and abducted at least eight Palestinians.

In Hebron, in the southern part of the West Bank, the soldiers abducted Ayman Sbeih, 24, from his home in the city’s southern area.

In Ramallah, in the central West Bank, the soldiers abducted Saddam Nimir Nafe’ and Awad Luay al-Khawaja from their homes in Ni’lin village, west of the city.

Also in Ramallah, the soldiers abducted Ali Rezeq Sadaqa, 24, and his twin brother, Mahmoud, in addition to Hamza Sadaqa, 28, from their homes in the al-Midya village, west of the city.

In Tulkarem, in the northern West Bank, the soldiers abducted Mahmoud Abu Sari from his home in Nur Shams refugee camp, east of the city.

Also in Jenin, the army invaded Rommana, Taybeh, Zabbouba, Aneen, Toura, and Misilyah, stormed and ransacked many homes near the illegal Annexation Wall, and fired gas bombs at Palestinians, protesting the invasions of Misilyah.

The soldiers also installed roadblocks near the towns of Jaba’, Sanur, Arraba, and Ya’bad, before stopping and searching dozens of cars.

Media sources in Jenin said the army deployed many tanks and armored vehicles in the illegal Mabo Dotan colonies and the hills near Ya’bad town.