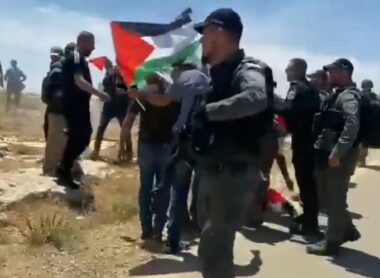 On Friday, Israeli soldiers injured many Palestinians during a nonviolent procession against the illegal Israeli colonialist activities in Masafer Yatta, south of Hebron, in the southern part of the occupied West Bank.

He added that the locals performed noon prayers on their lands before marching while chanting against the ongoing illegal annexation and colonialist policies.

The soldiers attacked them with gas bombs and concussion grenades, causing dozens of injuries, and attempted to abduct some of them.

The decision poses a serious threat to fourteen villages and Bedouin communities, facing displacement due to Israel’s illegal colonialist activities.

In related news, the soldiers invaded the al-Arroub refugee camp north of Hebron and handed Ehab at-Teety, an order for the demolition of a room on his land.