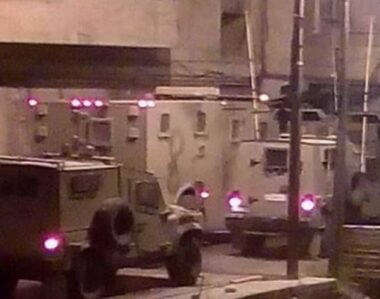 In Jerusalem, the soldiers abducted two young men in the Bab al-Ghawanma area near the al-Aqsa Mosque while heading to the holy site to pray.

The two, who were not identified at the time of this report, were moved to a detention and interrogation facility in the city.

In Jenin, in the northern West Bank, the soldiers abducted a former political prisoner, Ibrahim Fathi Amour, after stopping him at a military roadblock on the main entrance of his town, Ya’bad, west of the city.

The army installed roadblocks south and west of Jenin, stopped and searched dozens of cars, and interrogated many Palestinians while inspecting their ID cards.

On Friday dawn, the soldiers invaded and ransacked many homes across the occupied West Bank and abducted eight Palestinians.