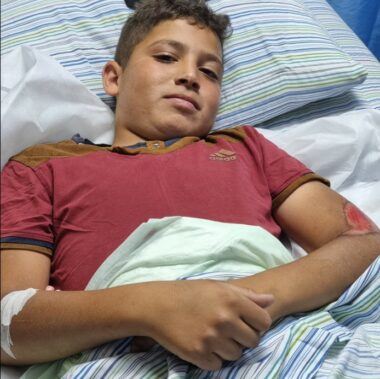 On Friday evening, Israeli soldiers injured many Palestinians in Huwwara town, south of the northern West Bank city of Nablus. After an Israeli colonizer rammed him with his car, a Palestinian child was also injured.

He added that the soldiers chased and attacked several Palestinians while raising Palestinian flags on poles and budlings, leading to protests before the army fired gas bombs and concussion grenades.

Medical sources said dozens of Palestinians suffered the effects of tear gas inhalation, cuts, and bruises and received the needed treatment on the scene without the need for hospitalization.

In related news, a Palestinian child was injured after an Israeli colonizer rammed him with his car near the main entrance of Beita town, south of Nablus, and fled the scene.

Palestinian medics rushed to the area and moved the wounded child, Amir Bashar Khdeir, to a hospital in Nablus city. Amir suffered various cuts and bruises.