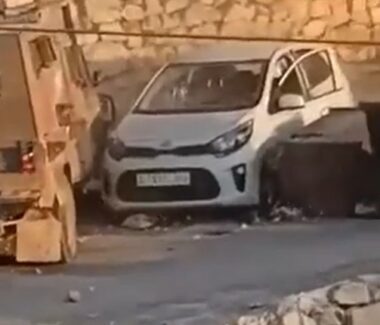 On Friday evening, Israeli soldiers injured at least six Palestinians, including two women, and caused many to suffer the effects of tear gas inhalation after the army invaded the al-Mazra’a al-Gharbiyya village, northwest of the central West Bank city of Ramallah.

Several army jeeps invaded the village, leading to protests before the soldiers shot three Palestinians with live fire, one with a rubber-coated steel bullet, and caused many others to suffer the effects of tear gas inhalation.

Also, a young man and a young woman were also injured when military jeeps rammed them during protests that took place after the army invaded the village.

The woman was driving her car when a speeding jeep rammed her car during the ensuing protests.

The invasion into the village was conducted from the direction of the illegal Haresha colony, built on stolen Palestinian lands in the Jabal ad-Deir area.

In related news, Israeli colonizers injured a Palestinian, Saleh Diab, in the Sheikh Jarrah neighborhood, in occupied Jerusalem; One of the colonizers attacked the man with a knife.