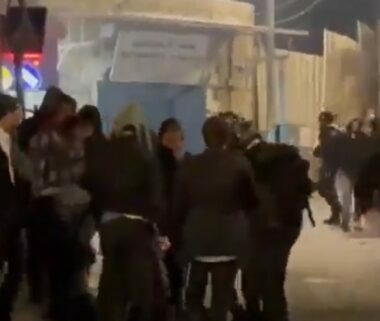 On Saturday at night, a group of fanatic illegal Israeli colonizers attacked a Palestinian family in their home in Sheikh Jarrah neighborhood, in the occupied Palestinian capital, Jerusalem, in the West Bank, causing injuries. Israeli soldiers also attacked and injured many Palestinians.

The Wadi Hilweh Information Center In Silwan (Silwanic) said the colonizers attacked a home owned by the local Salem family, prompting them to defend themselves from the assailants.

Silwanic added that Israeli soldiers and police officers also attacked the family and maced them with pepper spray, causing injuries.

“We are afraid; we cannot sleep. We are worried the colonists will burn us in our home,” Fatima Salem, an elderly woman living in the family home, said.

It is worth mentioning that the family recently received a final eviction order from the Israeli occupation authorities after granting the property to the illegal Israeli colonizers.

In related news, Israeli colonies attacked many residents, homes, and cars in the neighborhood before the police started firing gas bombs at the Palestinians who tried to defend themselves.

The attacks by the colonizers and the soldiers led to dozens of injuries, especially after the soldiers fired a barrage of gas bombs and concussion grenades at the Palestinians.

Many of the wounded Palestinians suffered burns to the face and neck, and dozens suffered the effects of tear gas inhalation.

Among the wounded was a child who was maced and assaulted by the colonizers.

The colonizers also smashed the windows of several Palestinian cars in front of Israeli police officers who failed to intervene and stop them.

In addition, Israeli Member of Knesset, a fundamentalist identified as Itamar Ben-Gvir, the fanatic Israeli far-right Otzma Yehudit party leader, said that he plans to move his office to Sheikh Jarrah to “protect the settlers if the police do not protect them.”

Dozens of Palestinian families in Sheikh Jarrah face the threat of displacement due to Israel’s illegal colonialist activities and are subject to constant violations by the colonizers, the police, and the army.