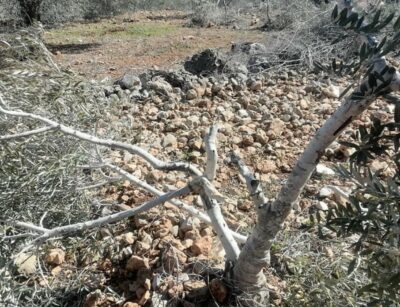 Samer Mosleh said the colonizers cut and uprooted the olive trees in the orchards in Bab as-Shu’ab, Abu al-Qasseeb, and al-Qassir areas, close to the illegal Tapuah and Rechelim colonies, built on stolen Palestinian lands.

“Our land is about seven Dunams; this is not the first attack in the area, just a few days ago, the colonizers cut and uprooted more than 22 trees, then 43 trees in a similar attack, and this time they cut 40 of my olive trees that were planted 12-15 years earlier,” he said, “They want us to leave by robbing us of our livelihood and personal security…”

Mohammad Moshel said the colonizers cut and uprooted forty olive trees in his orchard, adding that he planted them 2-3 years ago on four dunams of his land.

Salfit Governor Abdullah Kamil said the attack, not the first and not the last, comes with the encouragement, support, and protection provided by the Israeli government and its occupation army.

“These attacks show a lack of humanity in those assailants, and are proof of their racism, hatred, and barbarism,” the governor said, “However, we are here to stay, and we will continue to plant our lands and take care of them – we will defend outlands with all possible means.”