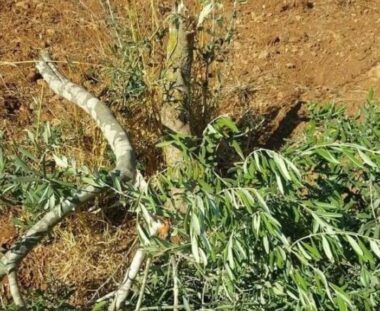 Eyad Hrebat, the mayor of Surif, stated that the colonizers came from the illegal Bat Ayen colony, which was installed on stolen Palestinian lands.

He added that the colonizers uprooted at least fifty olive saplings in orchards owned by Hassan Hmeidat, Mahmoud Hmeidat, and his brother Jamil, in addition to Abdul-Mo’ti Hmeidat and Suleiman Hmeidat.

In related news, the colonizers cut and uprooted at least eighty Palestinian olive trees in Yasuf village, east of Salfit in the central West Bank.