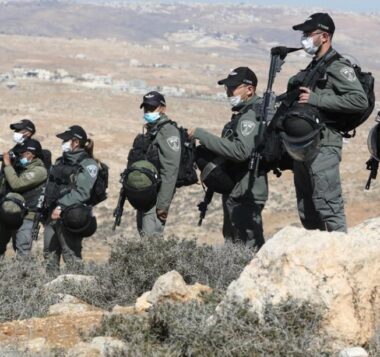 On Saturday, Israeli soldiers attacked a nonviolent procession against the seriously escalating violations by the illegal colonizers against Palestinian shepherds in Yatta, south of Hebron, in the southern part of the occupied West Bank.

Fuad al-‘Amour, the coordinator of the Protection and Steadfastness Committees in Hebron, said the Palestinians and international activists peacefully marched in condemnation of the escalating violations, including the recent attacks against the Palestinian shepherds and farmers.

The soldiers suppressed the nonviolent procession with gas bombs and concussion grenades.

The attacks in Southern Hebron Hills and surrounding areas aim at expanding the illegal Israeli colonies built on stolen lands.

The Palestinian shepherds in the area depend on herding and raising livestock as their only sources of livelihood and are subject to constant attacks targeting them, their homes and lands, and even their livestock, in addition to the destruction of barns and sheds.

In related news, Israeli colonizers and soldiers prevented the Palestinians from planting olive saplings in their orchards in the Rakhma area, east of Bethlehem.

The soldiers and colonizers attacked the Palestinians from the local Sha’er family and prevented them from planting the olive saplings in their orchards before forcing them away, while many colonizers threatened to shoot the Palestinians if they returned to their lands.

The colonizers also cut and uprooted at least eighty Palestinian olive trees in Yasuf village, east of Salfit in the central West Bank.

In occupied Jerusalem, undercover Israeli soldiers, driving a car with Palestinian license plates, infiltrated into the Shu’fat refugee camp, north of the city, before storming and searching shops, and attacked several Palestinians.