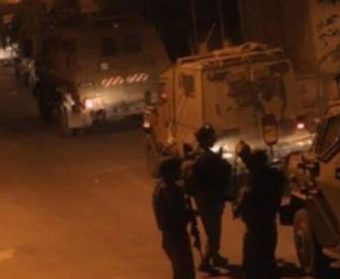 Israeli soldiers abducted, on Sunday at dawn, eleven Palestinians from their homes in the West Bank governorates of Qalqilia, Bethlehem and Hebron, the Palestinian Prisoners’ Society (PPS) has reported. Israeli colonists burn olive trees Near Nablus.

The Qalqilia office of the PPS, in the northern part of the West Bank, has reported that the soldiers invaded and searched many homes in various parts of the governorate, and abducted five Palestinians.

In Hebron, in the southern part of the West Bank, the soldiers abducted a former political prisoner, identified as Issa Mohammad Bahar from Beit Ummar town, and Raslan Rezeq Masalma, from Beit ‘Awwa town.