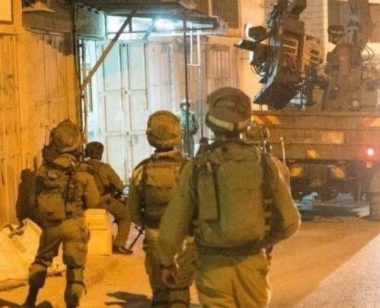 The Palestinian Prisoners’ Society (PPS) has reported that Israeli soldiers abducted, on Wednesday at dawn, eleven Palestinians, including a husband and his wife, in several parts of the occupied West Bank.

The PPS said the soldiers stormed and ransacked many homes, interrogated dozens of Palestinians and abducted the eleven residents, including a former political prisoner, identified as Mahmoud Mohammad Abu Ayyash.

Also among the abducted Palestinians is Mahmoud Salem Tarayra, the brother of Issa Tarayra, 15, who was killed by the army on September 20, 2016.

In addition, the soldiers abducted a husband, identified as Nitham Ma’ali, and his wife, Najla’, from their home in the Burqa town, east of Ramallah.