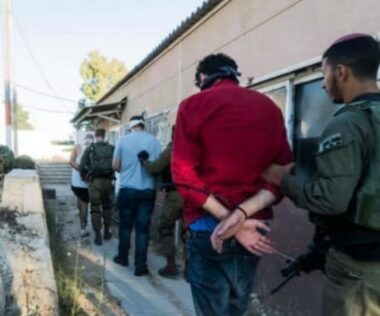 On Tuesday dawn, Israeli soldiers invaded and ransacked dozens of homes in several parts of the occupied West Bank and abducted eleven Palestinians.

In Nablus, in the northern West Bank, the soldiers abducted Islam Bishkar from his home in the Public Housing area in the city and detained his father and his cousin for several hours.

During the invasion, the soldiers abducted former political prisoner Anan Bishkar, his son Soheib Bishkar, and Shadi Bishkar but released them later.

The soldiers also invaded the villages and towns of Yitma, Qabalan, and Asira al-Qibliyya, near Nablus, and installed roadblocks in several parts of the governorate.

In Abu Dis town, southeast of occupied Jerusalem, the soldiers abducted Omar Salah, 16, after storming his family’s home and ransacking it.

In Ramallah, in the central West Bank, the soldiers abducted Khaled Walid Abu Fkheitha, 19, from his home in Ras Karkar village, west of the city.

The Palestinians abducted in Harmala are related to Mo’tasem Mohammad Atallah, 18, who Israeli soldiers killed on May 8th, 2022, near the illegal Israeli colonial settlement of Tekoa’, east of Bethlehem.

The soldiers also summoned Mahmoud Attallah, from Harmala, from interrogation at the Etzion military base and security center south of Bethlehem.

In Jericho, in the northeastern West Bank, the soldiers abducted a teenage boy, Mohammad Kamal, after invading his home and ransacking it in the Aqabat Jaber refugee camp, south of the city.

Furthermore, soldiers abducted former political prisoner Taqiuddin al-Hoor, from his home in Surif town, northwest of Hebron, in the southern part of the West Bank. His father is imprisoned by Israel and serving a life term.

Dozens of soldiers also invaded Jaba’ town, south of the northern West Bank city of Jenin, and installed a roadblock in front of the home of former political prisoner Morad Malaysha.

The soldiers also invaded and ransacked homes and occupied rooftops to use them as firing posts at Palestinians, protesting the invasion.