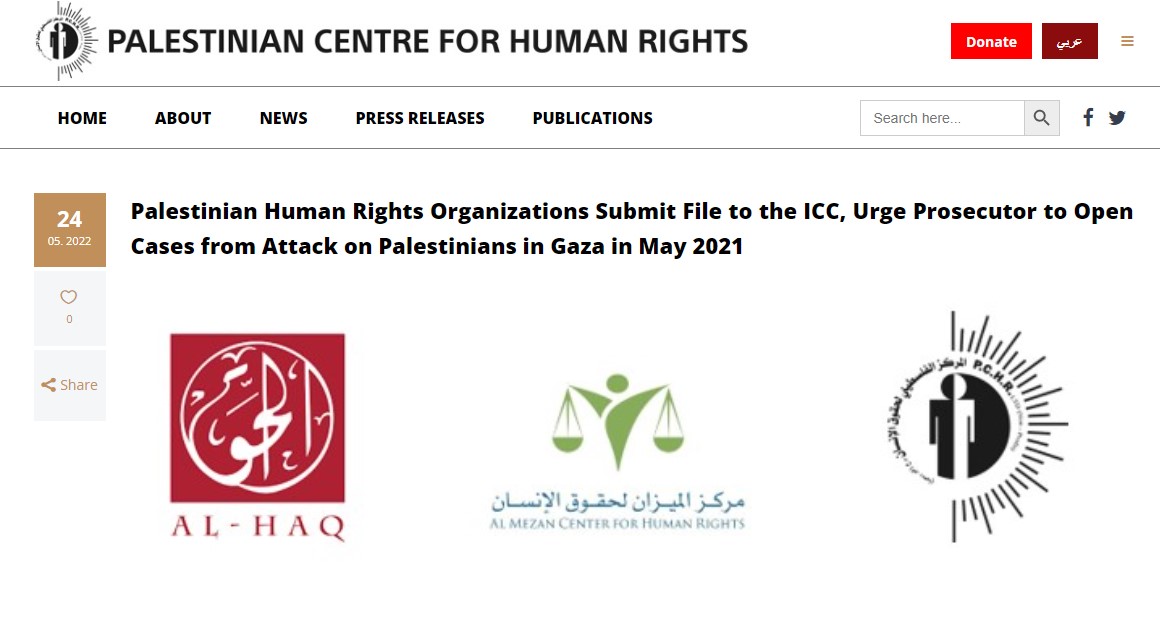 The Hague, 23 May 2022 – Today, the Palestinian Human Rights organizations Al-Haq, Al Mezan, and the Palestinian Center for Human Rights (PCHR) filed a submission to the Office of the Prosecutor (OTP) of the International Criminal Court (ICC) providing a detailed description and analysis of the war crimes and crimes against humanity committed during the May 2021 Israeli military offensive against Palestinian civilians in the Gaza Strip.

“The May 2021 attack on Gaza is just the most recent example of a series of highly destructive military operations aimed at causing disproportionate damage and suffering on the civilian population of the Gaza Strip, which is subjected to an unlawful 15-year-old closure,” said Raji Sourani, the Director of PCHR.

The operation, codenamed “Operation Guardian of the Walls,” took place in the context of an exceptionally hard wave of repression by the Israeli authorities across occupied Palestine: tensions escalated after Israeli courts ordered the expulsion of Palestinian families from their homes in the neighborhood of Sheikh Jarrah, in occupied East Jerusalem, and the transfer of those lands to Israeli settlers. These events resulted in protests spreading all over the territory of Palestine, which were met by Israel with an intensification of repression and resort to military force and violence.

In Jerusalem and within the Green Line this translated into waves of arbitrary arrests, police violence, and mobs of Israeli extremists lynching Palestinians while being shielded and supported by the authorities; in the West Bank, it took the form of tightening the occupation regime by the Israeli military and security forces.

The Gaza Strip, meanwhile, was crushed by a full-scale military assault, consisting of 11 days of heavy bombardments which resulted in the killing of 240 and wounding of 1968 Palestinians.

While these events are the context in which the facts must be considered, the analysis provided in the Submission focuses specifically on the international crimes committed in Gaza, in continuity with the previous military attacks on the Gaza Strip and its illegal closure, which is about to mark its 15th year.

The Submission finds that grave crimes within the jurisdiction of the Court have been committed on a wide scale by the Israeli authorities against Palestinian civilians and civil infrastructures of Gaza, including the crimes of willful killing, willfully causing great suffering, or serious injury to body or health, extensive destruction of property, intentional attacks on civilian objects and disproportionate use of force, within a military occupation, thus in the context of and associated with an international armed conflict.

“The commission of these crimes needs to be seen in the context of Israel’s prolonged, belligerent occupation of the entire Palestinian territory, and of the widespread commission of systemic crimes against humanity, including apartheid, and grave war crimes”, affirms Shawan Jabareen, Director of Al-Haq.

As already thoroughly outlined in another submission presented by the undersigned organizations to the Court in November 2017 and underlined by various independent high-profile reports (including by UN Committees), the structure of the Israeli investigative system precludes effective independent and impartial investigations, as 79% of the criminal complaints presented to the Israeli Military Advocate General received no substantial response.

“Victims have already waited for too long. How much longer will Palestinians in Gaza need to wait, before the ICC holds Israeli officials to account?”, said Issam Younis, the Director-General of Al Mezan.

The Submission concludes that only a prompt, concrete, and comprehensive investigation and the opening of specific cases against individual Israeli defendants by the ICC can end the decades-long impunity for crimes committed against Palestinians, possibly hamper their continuous and current perpetration and contribute to the prevention of further crimes.

International law has been violated relentlessly and blatantly by Israeli forces since its occupation of Palestine, in breach of most provisions of conventional and customary international law, prejudicing and obliterating any perspective of a “peace process” leading to a just resolution. An effective prosecution is therefore absolutely warranted, as it constitutes the last resource to restore the respect for and the enforcement of international justice.