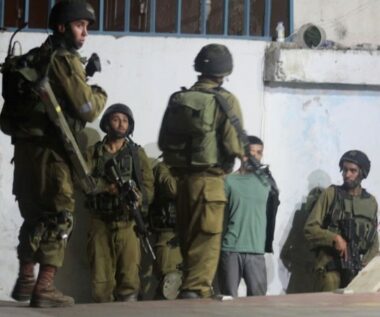 On Monday dawn, Israeli soldiers abducted at least eleven Palestinians from their homes in several parts of the occupied West Bank.

In Hebron, in the southern part of the occupied West Bank, the soldiers invaded and ransacked many homes in the city and abducted four Palestinians, including one child.

It is worth mentioning that Mohammad Hamamra is the brother of Qussai Hamamra, 13, who was killed by the Israeli army in Husan on April 13, 2022.

Many Palestinian youngsters protested the invasions and hurled stones at the invading military vehicles.

In Nablus, in the northern West Bank, the soldiers abducted former political prisoner, Yasser Badrasawi, from his home.

On Sunday night, the Israeli army said a Palestinian hurled an explosive at a military vehicle near Nablus.

The army claimed two Palestinians, driving a motorcycle, drove by a military vehicle and threw the explosive at it before the soldiers opened fire. There have been no reports of injuries.

On Sunday evening, the soldiers invaded Sur Baher town, southeast of occupied Jerusalem, and removed many Palestinian flags from its streets.