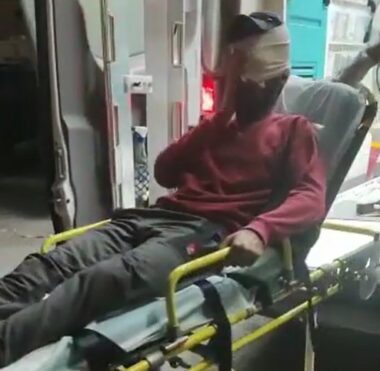 On Monday, Israeli soldiers detained a Palestinian man with special needs and repeatedly assaulted him until he lost consciousness at a military roadblock near Jenin, in the northern part of the occupied West Bank.

Eyewitnesses said the Israeli soldiers, stationed at the Dotan military roadblock near Jenin, cuffed the Palestinian and repeatedly assaulted him, causing him to faint.

Palestinian Red Crescent medics rushed to the area and took the wounded man to a hospital in Jenin.

He suffered various injuries to the face, head, arms, and other parts of his body after the soldiers repeatedly assaulted him.

The hospital published a video and pictures of the wounded young man, asking the public to help identify him.

He was later identified as Raja Suleiman Abu Safat, from Ya’bad town. His family said Raja is with special needs due to a mental disorder.

In related news, the army detained a young man, Rami Fashafsha, from Jaba town southwest of Jenin and confiscated his mobile phone after stopping him at a military roadblock near Jenin.