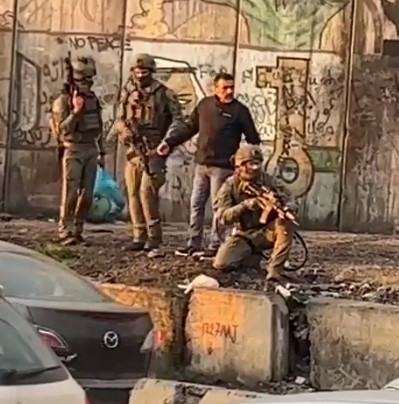 In the southern part of the West Bank in Hebron, the soldiers stormed and searched homes before abducting Luay Rateb Bheiss, 26, and Ashraf Hasan Al-Awawda, from their homes in Yatta town and Karma village, south of Hebron.

In Tubas, in the northeastern West Bank, the soldiers abducted Ahmad Saleh Al-Yaseedi, a member of the Revolutionary Council of Fateh Movement, from his home in Wadi Al-Far’a, south of Tubas. The army ransacked Ahmad’s home and the homes of Ahmad and Firas Janajara.

In Ramallah, in the central West Bank, the soldiers abducted Samer Mustafa Barghouthi and his son Bassel from their home in Beit Rima town, northwest of the city, in addition to Qussai Qatash and Mohammad Ammar from their homes in Yabrud village, east of Ramallah.

In occupied Jerusalem, the soldiers abducted former political prisoner Yousef Khatib, the head of the Popular Committee in the Qalandia refugee camp, north of the city, after invading and searching his home.

During the invasions and searches of homes in the refugee camp, the soldiers also abducted former political prisoner Raed Mteir and his son Samed.

The soldiers also invaded Sur Baher town, south of Jerusalem, searched homes, and abducted Issa Ali Attoun, the brother of Mohammad, who was abducted by the army two weeks ago.

In the Old City, the soldiers abducted a young man after stopping and assaulting him near Bab Hutta, one of the Al-Aqsa Mosque Gates.

In Silwan town, south of Al-Aqsa in Jerusalem, the soldiers invaded the homes of Adnan Al-Karaki and Khaled Az-Zeer and summoned them for interrogation.

In Jenin, in the northern West Bank, the soldiers abducted Ahmad Mahmoud Abahra from his home in the Eastern Neighborhood of the city.

The soldiers also invaded several villages and towns near Jenin, including Beit Qad and Faqqu’a.