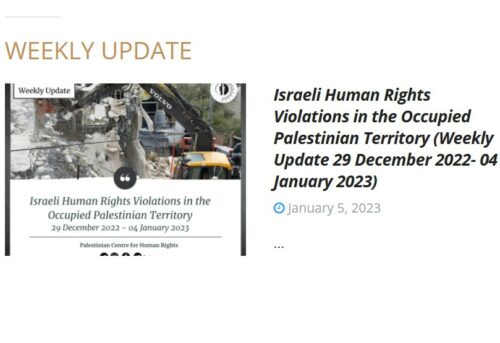 On 02 January 2023, IOF killed 2 Palestinians, including a child namely Fo’ad Mahmoud ‘Abed (17), and injured 6 others during IOF’s incursion into Kafr Dan village in Jenin. Before withdrawing, IOF arrested a Palestinian and demolished 2 houses as part of their collective punishment policy. (Details available in PCHR’s press release)

On 03 January 2023, IOF killed Adam ‘Issam ‘Ayyad (15) after being shot with a live bullet in his chest while another child sustained wounds by IOF fire during clashes that accompanied their incursion into al-Dheisheh refugee camp in Bethlehem.  (Details available in this press release)

Meanwhile, those injured were victims of IOF excessive use of force and shooting during their incursions into the Palestinian cities and villages, or IOF suppression of peaceful protests organized by Palestinian civilians, and they were as follows:

On 30 December 2022, 7 Palestinians were injured, including a journalist and a child, with rubber-coated bullets during IOF’s suppression of Kafr Qaddoum weekly peaceful protest in northern Qalqilya.

On the same day, 5 Palestinians, including a paramedic in serious condition, were injured by IOF fire during the latter’s incursion into Nablus’s Old City. Before withdrawing, IOF arrested a child claiming he was wanted.

On 31 December 2022, a 22-year-old Palestinian was injured with a rubber bullet in his foot during IOF’s suppression of Kafr Qaddoum weekly peaceful protest in northern Qallqiliya.

On 02 January 2023, 11 Palestinians, including 3 children, were wounded: 7 with live bullets and 4 with rubber-coated bullets during IOF’s incursion into Beit Rima village in Ramallah.  Before withdrawing, IOF arrested a Palestinian after assaulting his family and searching their house.

On 03 January 2023, 7 Palestinians, including suffocation of 4 children, after they house was burnt when IOF fired 4 teargas canisters in clashes that accompanied their incursion into Abu Dis village in occupied East Jerusalem.  Fadi Abu ‘Awwad, the house owner, said that his house was completely burnt and he could difficultly rescue his wife and children and leave from the house.  His 4-month-old baby girl severely suffocated due to teargas inhalation.

IOF demolished 8 houses, displacing 8 families of 50, including 8 women and 22 children.  Meanwhile, they demolished 2 civilian facilities and confiscated a tent used as a classroom as well as an excavator in the West Bank, including East Jerusalem. Details are as follows:

On 31 December 2022, IOF forced 2 Palestinians to self-demolish their two residential buildings of 2 floors built on an area of 140 sqms in al-Joz Valley neighborhood in East Jerusalem under the pretext of unlicensed construction.  As a result, 2 families of 9, including 2 women and 5 children, were displaced.

On the same day, IOF forced a Palestinian to self-demolish his 100-sqm house in Silwan village, East Jerusalem, under the pretext of unlicensed construction, displacing a family of 5, including 3 children.

On 03 January 2023, IOF confiscated a tent built of shed and steel by the villagers on the rubble of Safi School that was destroyed by IOF on 23 November 2022 in Safi village, southern Hebron.  It should be noted that 22 female and male students used to study in that school.

On the same day, IOF demolished four 60-sqm dwellings after vacating their contents in Sha’ab al-Batem village, southern Hebron, under the pretext of unlicensed construction in Area C. As a result, 4 families of 30, including 10 children, were displaced.  On 22 March 2022, IOF demolished dwellings for the same persons under the same pretext and they were rebuilt and funded by ACTED Foundation after 2 months of their demolition; however, IOF re-demolished them.

Moreover, IOF demolished a 170-sqm under-construction house and a 150-cbm water well in Ma’in village, southern Hebron, under the pretext of unlicensed construction in Area C. It should be noted that a family of 6, including 4 children, was supposed to live in that house.

On 04 January 2023, IOF demolished a livestock barrack of 70 sqms in al-Khader village in Bethlehem under the pretext of unlicensed construction.  IOF also demolished an under-construction house of 160 sqms in Silwan village in East Jerusalem.

On the same day, IOF confiscated an excavator for Ad-Dahiriya Municipality, southern Hebron, and arrested mayor Bahjat Jabarin and Nayef Makharzah, a municipal council member.  They were later released and notified that the excavator will be kept under IOF’s custody allegedly for working in Area C.

Settlers carried out 5 attacks, most notably destroying 30 graves in a Christian Cemetery in East Jerusalem and assaulting shepherds and vehicles in the West Bank.

On 01 January 2023, settlers broke into Jerusalem Protestant Cemetery that is maintained by the Lutheran and Anglican Churches on Mount Zion in central East Jerusalem.  They broke crosses and destroyed headstones of 30 graves.

Hosam Na’oum, a bishop in the Anglican Church, said in a press conference on 04 January 2023 that the surveillance cameras in the cemetery showed how settlers assaulted and vandalized the cemetery as well as breaking crosses and smashing iconography.

On 02 January 2023, settlers, under IOF’s protection, assaulted and opened fire at shepherds in ‘Arab al-Maleihat area, northwest of Jericho, while herding their sheep near their houses. However, no casualties were reported.

On the same day, settlers threw stones at Palestinian vehicles while on their way out of Kafl Haris village, northern Salfit, smashing the windows of vehicles parked in the area.

On 03 January 2023, dozens of settlers gathered near al-Aqsa Mosque and organized a provocatory protest that included dances and rituals.  When the protest arrived near Hatta Gate, IOF assaulted Palestinians and arrested one of them.

On the same day, settlers threw stones at a restaurant in Kafl Haris village in Salfit, smashing the front door.

Before the dawn, large forces of Israeli soldiers stationed around the Old City and at al-Aqsa gates and turned the alleys and streets into a military barrack.  They also imposed restrictions on the entry of worshipers into al-Aqsa Mosque, including banning entry of men under 50 years old.

On 02 January 2023, IOF demolished 2 houses as part of their collective punishment policy against the families of Palestinians who are allegedly accused of carrying out attacks against IOF or settlers. (Details available here)

On 03 January 2023, IOF raided 2 houses belonging to Islam Harbi al-Faroukh (26) family in Ramallah and Kafr ‘Aqab in East Jerusalem.  They took the houses’ measurements preluding to demolish them as part of their collective punishment policy.

IOF announced in a statement that their forces took measurements of the 2 houses to review the possibility of their demolition based on decisions will be taken.  IOF allegedly accused al-Faroukh of bombing attacks in Jerusalem on 23 November 2022 that killed 2 Israelis and wounded 2 others.

IOF carried out 161 incursions into the West Bank, including occupied East Jerusalem. Those incursions included raids and searches of civilian houses and facilities and establishment of checkpoints. During those incursions, 72 Palestinians were arrested, including 9 children. In the Gaza Strip, on 02 January 2023, IOF conducted a limited incursion into eastern al-Fokhari, east of Khan Younis.

Israeli occupation maintains its illegal and inhuman 15-year closure on the Gaza Strip. Details are available in PCHR’s monthly-update in the Gaza crossings.

During this week, IOF closed Qalendia, Jab’a, and al-Za’eem checkpoints in East Jerusalem several times to the vehicles and later reopened them. Also, on 31 December 2022, IOF closed the detector gate at Beit Jala village, western