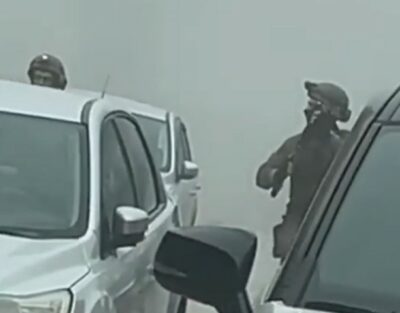 The soldiers also invaded several villages near the northern West Bank city of Jenin, searched homes and structures, and interrogated many Palestinians.

Media sources said the soldiers invaded the villages of Arrana, Faqqua, and al-Jalama, after surrounding and isolating them.

They added that the soldiers conducted massive searches of homes and structures, including at least one barn, and interrogated many Palestinians while inspecting their ID cards.

In Nablus, also in northern West Bank, the soldiers abducted Ammar al-Oweiwi from his home in the city and Ammar Ragheb Salah from Burqa village, northwest of Nablus city.

In occupied Jerusalem, the soldiers abducted a child, identified as Qais al-Ghoul, 15, from Ras al-Amoud neighborhood, and a young man, Osama Oleyyan, from Anata town, northeast of the city.

It is worth mentioning that Qais is the brother of Ward al-Ghoul, 20, who was abducted by the army three weeks ago and has since been held in solidarity confinement subject to constant interrogation in the al-Maskobiyya Israeli interrogation facility.

Also, undercover Israeli soldiers infiltrated the Qaddoura refugee camp, near Ramallah, before more than ten military vehicles invaded it and conducted searches in the area before the soldiers kidnaped a former political prisoner, identified as Tamer Shawamra.

A similar invasion targeted many neighborhoods in Hebron city and several surrounding towns in the southern part of the West Bank.