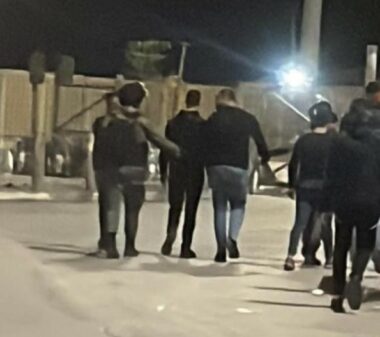 On Thursday dawn, Israeli soldiers abducted fifteen Palestinians, including a journalist, two fathers, and their sons, from their homes in several parts of the occupied West Bank.

In Hebron, in the southern part of the West Bank, the soldiers abducted seven Palestinians, including a journalist and two fathers and their sons, from their homes in several parts of the governorate.

The soldiers invaded and searched many homes in Sa’ir town, northeast of Hebron, and abducted a journalist, Abdul-Mohsin Shalalda, in addition to Mohammad Ali Abu Tabeekh, his son Ali, Issa Ahmad Shalalda and his son Ibrahim.

In Tuqu’s town, southeast of Bethlehem, the soldiers abducted a young man, Wajdi Samer Al-Badan, 19, from his family’s home.

The soldiers also stormed and ransacked many homes in Harmala village, east of Bethlehem, interrogated several Palestinians while inspecting their ID cards.